Our property on the Bay of Quinte is home to several species of native trees. In one area we call the glen, we’ve been witnessing an ongoing onslaught by invasive insects. Over a period of three to four years we watched helplessly as a group of ash trees slowly lost their battles to the Green Ash Borer Beetle. It bores pencil holes into the bark, then tunnels under it to access the tree’s vital supply of sap. Simultaneous attacks by tent caterpillars forced the trees to leaf out twice in the same season depleting their reserves.

The first tree to come down was a 60 foot specimen that was still mostly alive when we felled it. It 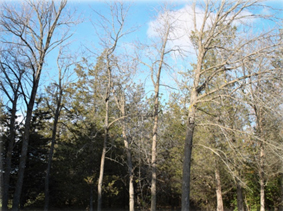 came down with a heavy thud that shook the little glen, and sent my son and me running for cover.  We bucked the side branches and left the trunk for another day.

Three nights later I awoke around 4:30 AM for a bathroom visit, and became wide awake afterwards. Since it was a mild October night, I put on my bathrobe and slippers in the dark, and decided to walk down to the glen to make a rare, early morning meditation.

I had forgotten about the felled tree laying in the middle of the dark glen, and even though my eyes were dark adapted, I walked right into some branches. Fully awakened, I peered with great effort into the darkness before me to make out any obstacles. Slowly, my eyes took in a faint ribbon of light stretching away from me. I had to take a few steps back to catch my breath and regain my balance. 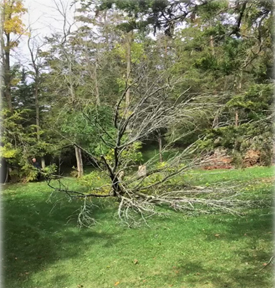 Puzzled, I walked back up to the rim of the glen from where I could see that there were no patches of low-lying fog forming anywhere. The night sky above was clear and starlit, and there was no evidence of sky shine from other ground sources. I gave the long sliver of glowing light a wide berth so as not to disturb it, as I walked around to approach the fallen trunk from the side. I wanted to discover the source and extent of the glow, and now it was inches away. I could make out a soft grey-blue glow hovering over the full length of the trunk like a thin cloud of gas or plasma. As my mind took in the significance of the scene my head dropped intuitively out of respect for what I knew in my heart was a lifeforce leaving the dying tree. I wanted to reach out to touch it in ordinary reality, but my life time as a trainer in radiation safety kicked in, and my hands pulled back. Instead, I said a few words of regret, and my body started to shake with excitement or cold, as I sat in quiet wonder.

The glow disappeared as the morning light entered the glen. I rushed to the house to investigate the strange glow on-line.

My cursory research suggested that it fit the pattern for bioluminescence from decaying organic matter. The common name is Foxfire or Will ‘o the Wisp, and it was documented long ago. The usual sources are decaying matter and fungi, and the glow is so faint that it can only be observed if your eyes have been dark adapted. Apparently, the light is produced by a pair of special enzymes present in decaying matter which react to release biophotons of soft light.

After discussing the tree’s eerie glow with an experienced woodsman and chemist, I pushed aside my subjective experience in favour of a simpler and less controversial explanation for the glow. I accepted that the light I had observed that morning came from rotting sawdust created under the ash bark by destructive beetle activity.

A few days later I started to dissect the trunk for firewood, when I noticed how little sawdust had 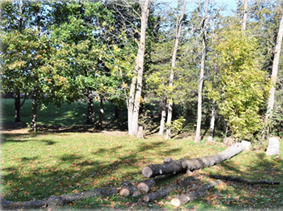 been produced by the beetle invaders, and how thick the bark was. The amount of sawdust under the bark was trivial, far too little to produce all the light that I had observed. In addition, the bark was so thick that it would surely absorb all the light photons completely.

More compelling, was the sudden realization that the rest of the ash trees that were still standing were equally infected, however; they did not give off any visible light emissions on that morning.

My research included another natural source of light known as St. Elmo’s Fire. It seems to be quite rare, and occurs during thunderstorms when the atmosphere becomes highly charged. High voltage transforms atmospheric gases into a glowing mixture of subatomic particles, forming a cloud or plasma that is conductive. Florescent tubes work on this principle. However, our skies were perfectly clear on that morning, and there was no evidence of an unusual glow anywhere in the rest of the glen.

None of the natural process could explain the unusual phenomenon in ordinary reality, leaving us with a startling conclusion that sent a chill up my spine: the glowing ribbon of luminous energy hovering over the dying ash tree was most likely its life force or spirit leaving the tree. It appeared as a viscous, homogenous layer of grey-blue luminous energy about 2-5 cm thick, hovering over the entire trunk, but not the branches. There was no music, strange faces, or movement associated with the phenomenon.

This visual evidence has proven to my scientific mind that some trees manifest a kind of luminous energy at the time of death, and which we commonly call spiritual energy. Why is there no documentation of this anywhere? Can only autistic or shamanic eyes discern spirits?  Now I see trees differently. Wherever there are trees, there is abundant life. They’re like fasteners that connect the sky with the earth. Because they live in both worlds, they act as a living conduit of communication between them.

Functional MRI studies reveal that consciousness is still measurably present after the brain/body has died, telling us that consciousness is not the result of biological processes. Science supports the theory that trees have intelligence based on the observation that trees can mount organized defenses against a deadly threat like invading insects. Planning and strategizing require creative thought.

When the rest of the ash group is felled this spring, they will hopefully provide more opportunities to study this undocumented phenomenon, perhaps with a night vision camera.

Shamanic and other spiritual cultures around the world honour and use sacred trees as: portals or gateways to hidden worlds, sources of wisdom, and even wish fulfillment. To name just a few, the Mohawks of North America honour the cedar as the sacred tree of life. The Caribe natives honour the ceiba tree, and West African’s have spiritual relationships with the iroko tree.

The visible light emissions coming from the ash tree trunk 3 days after it was cut down, proved to me with high confidence that trees have a spiritual nature that gives them life, and it can be observed and possibly documented under the right conditions.

A Table of Union
The Peruvian Mesa as a Syncretic Tool

My shamanic training is rooted in Peruvian curanderismo, specifically in the use of the spiritual altar called a mesa. A mesa is the shaman’s gateway into the soul realm. In Spanish, mesa literally means “table,” which is fitting because it is the place where the...