Not All Who Wander Are Lost

After a half-hour climb, I stand in an outcropping of rock at the top of a hill covered in heather and gorse. Below me, shrouded in mist, lie the wild lands of Dartmoor National Park. I have come in search of Grimspound, the remains of a late Bronze age village. It is my third attempt in as many years. Despite GPS coordinates (guaranteed within 30 feet) and detailed British Ordinance Survey maps, my two previous efforts to find a four acre circle of stone were conspicuously unsuccessful. I wandered for hours through the winding roads of the moor, dodging sleeping sheep, gawking at cows with horns wider than my small car, and feeding the occasional wild horse that meandered up to my car as I sat studying my maps.

I close my eyes and connect with my Spirit Guide who, once again, advises me in no uncertain terms that I should––no, must––be here. I express my frustration, vowing to leave and never try again. She simply laughs. When I open my eyes the mist has cleared. In front of me, I instantly recognize an ancient stone path leading down to a low circular stone wall enclosing the remains of several stone structures. As I begin to descend to Grimspound, I smell burning wood and hear faint sounds of chanting although I am utterly alone. I reach the outer wall and begin to circle it looking for an opening. I come to a gap and start to step through. “NO!” I hear a voice say. I stop. A feeling wells up deep within me. I have been here long ago and the entrance is further on. I continue walking around the outside and come to the village entrance. As I enter, memories come flooding back: the chieftain lived over there, the Priestess’s hut was here, and in the center was the communal area. I am Home. I unpack my traveling altar, take out my drum, and perform a simple ritual in honor of the Ancestors. Upon departing, I pick up a small stone to add to my altar back home and leave a small crystal in return– pushed deep into a crevice in the wall of the Priestess’s hut.

I have been visiting Cornwall and Devon in England at least once a year since 2007. The first two visits were organized tours with fellow shamanic practitioners, although organized and shamanic practitioners are words seldom used together! Since then, I have been there alone and with companions. Over the years, I have come to think of these visits as pilgrimages. My most profound experiences have usually occurred when I have been guided and accompanied only by my Spirit Helpers. Traveling along the Path with fellow pilgrims is also a sacred experience.

On these pilgrimages, my spiritual experiences fall into two broad categories. The first involves a deep connecting to the Ancestors. I often feel this connection as a past-life or déjà vu, but always, the bond to those who have lived there in the past resonates within me. I feel seamlessly connected to the Ancestors, and through them, to the Land and to the Past. My experience at Grimspound is a good example of this.

At other times, a connection to the Spirits of the Land is paramount. This usually occurs at a place used as a sacred site for millennia. Possibly, the Land Spirits are easily accessible at these places because they have been revered and honored by the ancients for thousands of years. Or maybe modern people are drawn to such places because the veil between the worlds is especially thin. It is probably a chicken or egg riddle. But the energy is palpable. When I stand still (especially internally) it washes over me in waves of ecstasy.

Saint Nectan’s Glen in north Cornwall is one such place where, at for me, the veil is virtually nonexistent. The glen is reached by a traversing a deeply wooded path that meanders alongside a small stream. Fellow pilgrims have built hundreds of stone cairns along the path and in the stream. You expect a Piskie (Cornish fairy) to pop out at any minute. Eventually you ascend a set of stone steps and encounter a modern tea house and a sixth century monk’s cell re-purposed as a shrine to the old Gods with candles, clooties (Celtic prayer cloths), written prayers, and offerings.

Climbing down another set of stairs to the glen, you turn a corner to see the sixty-foot waterfall cascading into a pool through a natural rock opening. The water flowing through the opening engulfs the entire glen in the energy of the Divine Feminine. Along one rock wall visitors have placed messages of hope and healing scratched into the small pieces of shale that dot the ground. I have visited this sacred site on each of my pilgrimages and have no intention of stopping any time soon. I often drum and sing and journey here surrounded by total strangers without my customary embarrassment. 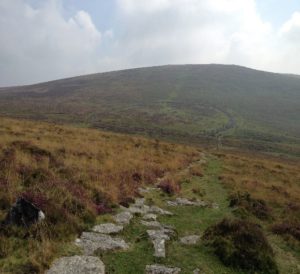 Although I visit some places on every trip, such as St. Nectan’s Glen, at others like Grimspound, I leave feeling complete with no need to return. Yet some of my most powerful and unforgettable experiences have occurred during these one-time visits. I drummed and journeyed in Merlin’s Cave. I slept naked in a fogu (a bronze age earthen structure thought to be for meditation) and journeyed to the Dark Goddess only to find in the morning that I had spent the night with several million spiders. (Possibly less than millions, but still a whole bunch.) I slowly walked the stone rows at Merrivale and collapsed sobbing in the center with a deep, profound sadness that came upon me suddenly and without any conscious knowledge of why.

On my very first trip to England, I found myself striding down a country lane, my walking staff raised high, shouting at the top of my lungs, “I speak the Truth of the Gods. Ignore me at your peril.” Ten years later I’m still wondering where that came from and what it means. My annual pilgrimages consist of a mixture of familiar traditions and new adventures. I always start off in London with a visit to the Chelsea Physic Garden, founded in 1673, to ease the transition from ordinary reality. Next is a visit to the statue of Boudica, the Celtic Queen who led a (nearly) successful revolt again the Roman occupiers. Boudica has become one of my primary Spirit Guides, especially on pilgrimages in England. At her statue I leave a small offering of flowers as I silently curse the souvenir kiosks that surround her, although she seems totally unflummoxed. The lure to return year after year is spurred mostly by the new experiences. The thrill of finding a new stone circle or sacred well, of honoring the Spirits of that place, and the often unexpected lessons and deep knowledge I receive call me back. I sit with my back against a stone, begin to drum, and open myself to the timeless wisdom that flows from the Spirit World. Even knowing this, I still plan each day of my pilgrimage in detail for months beforehand: Where I will go, what I will do, and the route I will take. The Gods laugh! I often find myself lost and having to trust that my Guides have alternate plans. Without exception, my most memorial experiences have come just as I was giving up, then turned a corner or burst through a thicket to find a single standing stone waiting to speak with me.

Over the years, I have found that experiences are more profound when I stay focused internally. I purposely limit my communications with friends and family back home and avoid sharing my “epiphanies” on social media. But it is comforting to know I have emotional and spiritual support if I need it. I have stayed at the same B&B in Cornwall on every trip. The owners welcome me as family, respect my privacy, and unknowingly provide me a sense of security and familiarity when the “learnings” become too intense.

I look forward to returning Home again this year. After all this time I can honestly say I am no longer surprised at the experiences and wisdom I continue to encounter on my ten year (so far) pilgrimage. But I remain absolutely amazed. If that amazement ever fades, I’ll know this learning is complete. 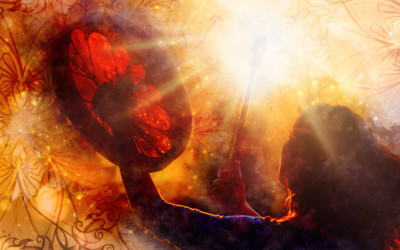