Brigid: The Celtic Spirit of Fire

This year, February 3rd marked the celestial midpoint between the winter solstice and the spring equinox, and for the Celts, this is “Brigid time.” It is called Imbolc (pronounced IM-olk), one of the cross-quarter days on the Celtic Medicine wheel.

Brigid is arguably the best-known Irish-Scottish deity, and one of the easiest to work with. She is most often called the goddess of springtime, because, in the British Isles, the very first signs of spring really may appear in early February. Not so much for North America. In Minnesota, where I live, visible springtime doesn’t emerge until mid to late April.

So it was always a source of consternation for me when the internet would abound with Brigid celebrations in early February. This article lays out how I’ve come to terms with that.

Brigid is most often called the goddess of springtime, or the goddess of healing, poetry and smith craft (forging metal objects). But stories about her call forth many powers: fire, water, the heavens, dawn, the earth, new life emerging, inspiration, fertility, but also grieving, compassion for the poor, and even crafty political maneuvering. This wide breadth of powers reflects the Mother-Goddess quality that Brigid embodies.

Because of her link with the emergence of the light half of the year, and springtime, the wondrous internet has offered us thousands of images of Brigid as a young, sexy flowing-haired maiden. There is some benefit to picturing sacred energies in human form—it makes them a little easier to chat with. But it’s a mistake to think of Brigid as innocent or naïve.

I love this story: 2,400 years ago, a Celtic warrior king named Brennus sacked Rome and held it for a few months. The story goes that, walking down the main boulevard, Brennus gazed up in astonishment at the many statues of the Roman deities displayed one after another. He then turned to his men and guffawed at how utterly simple-minded these Romans were—to believe that the deities looked anything like human beings. The deities are forces of the universe, far beyond human. To box them in with our human categories—god of war, goddess of intellect—was so utterly small-minded and arrogant.* So, when you read that “Brigid is the goddess of healing, poetry and metalworking,” you are actually being quite Roman, and not Celtic. This urge to classify deities, to draw lines around them, is something that the Western mind does, not the indigenous mind. In truth, this “packaging” of the Gods is a way of diminishing them, forcing them into a form pleasing to humans, a way of controlling their unpredictable power. The Celtic deities rarely fit into neat human-made categories, and that is one thing I love about them. 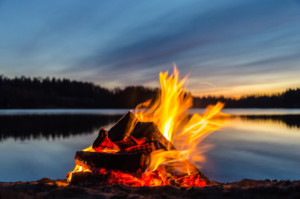 When we work with Brigid, we are, in essence, working with the element fire. In some forms, like dawn and early spring, fire energy is sweet, spacious, gentle, careful, and delightful. In this way, Brigid is the bringer of human inspiration—the Gaelic word is “Imbas” (Gaelic for “fire in the head”)—the spark of “aha!” that bursts in all artistic and creative work. This is why the ancient Irish poets saw Brigid as their lifelong guardian, teacher and patron spirit.  One beautiful image of Imbas/Brigid is this: it is the gleam of light inside the drop of morning dew suspended on the edge of a leaf overhanging the river Boyne at dawn. The Boyne is perhaps Ireland’s most sacred river.  And in this gentler form of fire, Brigid is also seen as goddess of the hearth—the central spot in ancient Irish and Scottish houses, where the fire burns constantly, warming the house and cooking the food.

In more concentrated form—with more heat—Brigid of the fire brings the warmth of springtime to melt the constricting forces of winter inside the land. She calls out the new life hidden under the layer of ice. This is why she is a healer, because she unbinds the death force (death is cold), she evaporates darkness, and she melts hard, frozen, constricting winter where she finds it—whether in the land, or in the body, or the heart, or the mind. She sees underneath our story of victimization, she sees under our martyrdom and arrogance and blame.  She sees the new life waiting to be called forth. Brigid is “warmth”—an elemental energy in nature, and “warmth” underlies healing in many ways. This is why she is connected with the earliest spring flowers, which sometimes arise through the snow. You can ask Brigid to come to melt whatever cold force is freezing you in place. 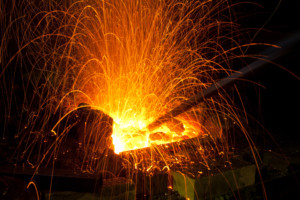 In even more concentrated form, Brigid is the intense fire in the forge—the fire that transforms something into a different shape. As the goddess of the forge, she is the spirit infused into beautiful and useful metal objects: containers, farming implements, adornments and weapons.

Heavy iron is penetrated by fire and it is unshaped—it takes on the unformed flux, heat, and color of the fire element itself. The heat of the forge needs to be intense because the iron does not want to change. So, when it is necessary to affect transformation, Brigid turns up the heat. In this way, Brigid is present in any initiatory event in our life, and in those events where we feel great resistance, she may come as a gentle flame at first, but if our resistance does not melt away, she may turn up the heat. When you are in an intense time of change, you can ask Brigid to tend to your transformation with her great healing love and expert artfulness, and affirm your trust in her skills. You can ask her to help you let go of resistance to being re-shaped.

During these early days in February, Brigid can be thought of as a solar goddess. She’s not a sun goddess, but the spirit of light itself, and all the things we associate with light: spiritual wisdom, intelligence, truth, healing, prophecy and divination. And justice: one of her most ancient names is Breo-saighead (pronounced “BREE-o SUH-yed) meaning “fiery arrow”—an image of divine justice. In the form of Brigantia—the patron goddess of northern Britain—she offers a big vision of time and the heroic quest. 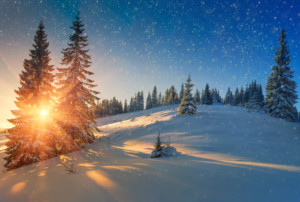 The early February light, especially in places that are still locked in cold and snowy winter, Brigid is the very new light that transforms old darkness—the kind of light that is barely perceptible. This is the kind of light that enters someone’s mind at that very first, dim thought of asking for or delivering forgiveness. It’s the very first thought in the process of changing an old bigotry, or letting go of an old self-image; the first spark of the idea that may change one’s entire worldview. On February 3 it’s not the presence of radiant light but the subtle shift of the angle of light that begins a process of changing everything.

So, in in the great frozen north, I like to celebrate the celestial aspect of Brigid in early February. In the cold of later February and March, I like to do healing ceremonies with Brigid—healing for people, or land, or whole nations and the human species—asking for her to breathe her new life into old dead winter—the dead ideas, the dead beliefs and ways of life that bring death to us and others.

Near the spring equinox, I like to celebrate the fight between Brigid and the Winter Hag (sometimes Brigid’s Mother), the Cailleach. This mythic fight between winter and spring is laid out in the old Scottish tale, “The Coming of Angus and Bride” (Bride being a Scotts name for Brigid).  I like to celebrate the goddess of springtime in mid-April when I can see the new flowers emerging. I celebrate Brigid’s hot flame of transformation whenever a new idea comes to fruition, into shape in this world, or whenever transformation becomes difficult.

The work we can do with Brigid is limited only to the size of our imaginations and heart. Like the direction east on the medicine wheel, like dawn every day, and like the idea that comes any time of day, Brigid is ever-present and ready to help us, no matter the weather.

Note:
*Historians describe two Gaulish chieftains named Brennus. One sacked Rome in 387 BCE and the other attacked the treasury at Delphi, Greece in 278 BCE. This quote has been attributed to both of them.