Like shamans, poets have visionary experiences which they share with others through their poetry.  If a poem is mystical, or even semi-mystical, it resonates with something deep within us.  We feel that our souls understand the poet’s vision.

Aristotle said that image is the language of the soul.  Our souls don’t need to speak rationally or linearly or logically as our conscious minds might prefer to do.  Souls have their own logic, their own truths, and these are expressed by images, such as in visions, dreams, shamanic journeys—such as in poetry.

The poems in this month’s publication strongly suggest that when they wrote them, the poets were in a kind of  trance, or perhaps “on the edge of trance,” as poet W.B. Yeats characterized the rural Irish. Their poems present an alternative view of reality quite similar to the alternative realities that shamans understand and journey to in their own altered states of consciousness.  As we read poems like these, we ourselves can easily slip into the visionary state that the poets had when they were inspired to write them.  We enter with the poets into a shared reality.

If a poet has what we might call a “shaman’s soul,” the vision expressed in his or her poem will tap into shamanic wisdom, and other shaman souls will be enriched by the poem.  We, the editors, believe each of these five poets has a shaman’s soul, and that their poems will speak to you and enrich your own shamanic life.

Once I Flew As Owl 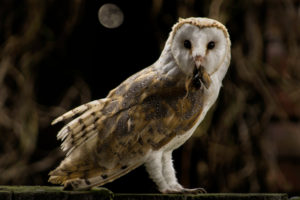 Once I flew as Owl,
eight scimitars stretched for the soft furred belly
to grasp, to rip and rend.

Death must come on owl wings, they are so silent.
I could hear the mouse beneath dry leaves
pursuing its secret way.
It never looked up.

Later, hunched on my tree limb,
beak flecked with blood,
I digested my savage philosophy,
knowing soon I would vomit up
the bones, the fur, the tiny claws.

Cait Johnson has authored six works of spiritual non-fiction, and her poem “Cold Moon” was included in Measure for Measure: An Anthology of Poetic Meters, from Random House. Formerly on the faculty at the Stonecoast MFA in Creative Writing program, she has a private practice as an intuitive counselor in the Rhinebeck, New York.

When the shaman spoke
He spoke of ice melting.
Lots of it!
It’s in the ocean, he said.
You can’t change that.
He saw us as polar bears
Clinging to our ice floe.
He was too sad to be angry. 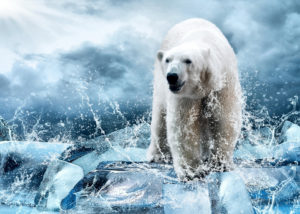 Don’t feel sorry for the polar bear,
He said,
Feel sorry for yourselves.
After his closing remarks
He raised his voice,
Filling the hall
With a prayer to the elements
That drowned out
Every fear and excuse and regret,
Everything but my admiration
For his nobility
And courage.
When he left the stage
No one applauded.
We were too stunned.
I sat up tall,
And looked around
At all 10,000 of us,
In the great hall.
And then I sat up taller
And looked around some more
And then I sat up taller still.
And now it seems like a dream
But I saw all of us
Turning and turning.

Gary Lindorff, a Shamanic Practitioner and a Veteran dream worker with a strong Jungian background, lives with his wife, Shirley, and their two cats in rural Vermont. He is the author of 13 Seeds: Health, Karma and Initiation. He cherishes his relationship with the land and worries about the future of Gaia.    https://garylindorff.wordpress.com 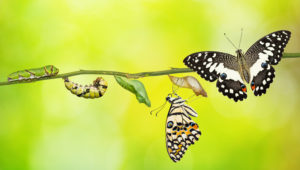 Each creature is a shape shifter.
The calf, the lamb, the tadpole,
the caterpillar, the foal, the fawn,
all will grow and change.
Everything shifts, whether fluff
of dandelion, pea in its pod,
seed of pine cone, flax seed, mushroom
spore, corn kernel.
Everything shifts, changes. The glass
in the window runs down to thicken
at the bottom. Silt is pressed, hardens,
becomes stone with fossils contained
within. Icebergs calve,
float, melt. Shadows shift
throughout the day, as earth
shifts which side is to the sun.

Debbee Stone is a semi-retired teacher who writes with the kind support of writing friends. She was born in Poughkeepsie, New York, and has lived most of her life in the Hudson Valley.

As a sparrow so sweetly
I have sung you to me.
The blue, blue sky
a canvas for all that I have ever dreamt.
Since the time of my birth
my voice has called you to me
in the most innocent notes
of my heart song. 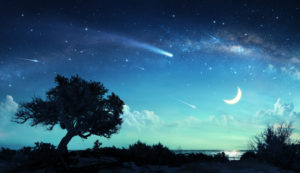 And before that, my soul
danced along the stars
alongside yours—
Catching glimpses of the other
as we weaved in and out of time
shapeless and ethereal;
The wise ones knowing all the while
what lies behind, before, and in this moment.

Now it doesn’t seem so strange the way
we knew right away
what we were too timid to claim at the time
and the way all of the others knew as well.

For you are also a sparrow
singing me to you
since the time of your birth
sweet notes of the universe at play.
And we, mere birds, riding the currents
Of what we have always known.

Melanie VanOstrand. a Shamanic Practitioner and Celtic Reiki master-teacher, holds a masters degree in literacy instruction.  She is the owner of Sea in the Sky Healing and Wellness Center in Hebron, Connecticut. 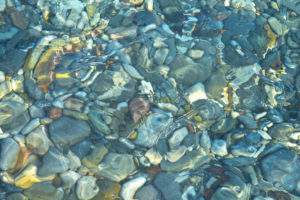 song of the stones

Why do you say ‘heart of stone’?
What do you know of either?
We could teach you lessons
of catastrophe, the violent heave,
the deafening tumble, then
the silence, the silence,
endurance, the slow sweetness
and sorrow of water shifting
our shape, finding our faces.
Here is what we ask of you:
walk among us, stand,
sit still. Look till you see
our faces, till you know our faces,
learn them by heart, turn
your hearts to stone. 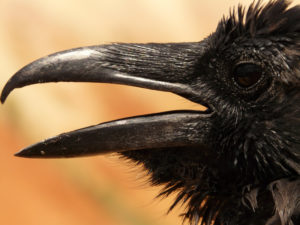 our talk is not idle, not
human, not sound to silence silence
but sound to make silence ring
to wring the blue from the sky
and bring it drenching down
to the bone
what is hard for the ones who only walk
is easy for us, easy
to perch on the highest rock
or the top of a dead tree
easy to float on the wind
upside down, easy
to dive to the heart of a swamp
our beaks are curved and golden
our tails, the envy of crows
but our voices, oh, our voices
part the way between worlds,
veils, mists, stones, life, death
you walkers can’t fly but you can
follow our cry, follow
if you dare 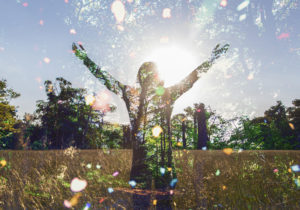 they say the gods are gone from here
they said the gods are ghosts
dead as their devotees, but I remain
unsheltered from sun, from rain
in a roofless ruin where wildflowers
succor the last wild bees
there is pollen and leaf and snow
the gods still dance in motes of dust
I stir and sweep day after day
believing still in the slightest chance
someone will  come from far away, from long ago
to sweep me into the dance
by firelight our shadows will leap
and the gods will reappear

Elizabeth Cunningham is best known as the author of The Maeve Chronicles, a series of award-winning novels featuring a feisty Celtic Magdalen. These three poems are from her forthcoming collection Tell Me the Story Again.  http://elizabethcunninghamwrites.com/