WHAT DOES ACTING HAVE TO DO WITH SHAMANISM?

Several years ago during a shamanic training I had with Michael Harner, he said something that stayed with me for a long time. He commented in an off-handed manner, “Some of the best shamanic practitioners are actors.” I puzzled for some time as to what he meant by that comment. Did that mean that some practitioners were faking it? Doing so well by “acting” the role of shaman they were able to deceive the client into believing in their authenticity? Is doing shamanic work a “fake it till you make it” proposition? As you’ll see, it’s definitely not about faking it or “acting” the role the way most people think of what acting is, but instead about fully embodying the role of shaman. 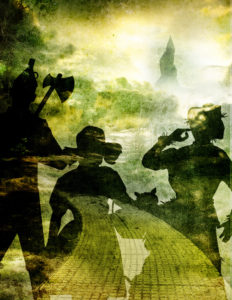 Jump to a few years later. My niece Jordan, 16 at the time, asked me to go with her to a local acting school. She wanted to attend one of the classes that started that evening and wanted my support. I gladly agreed and accompanied her to the school. I had dabbled in acting on a few occasions and loved it, but other than playing the Tin Man in a community theater production of The Wizard of Oz and doing some improv classes, I never seriously pursued acting.

While Jordan was in class I spoke with Barbara, the administrator of the school, sharing with her my limited experience with acting but also an occasional desire to do more. After we talked for a while, she said, “You should check out Randall’s class. If you want, I’ll take you there and introduce you.” We walked to the classroom where Randall was teaching the last few minutes of a class with children.

Just as Barbara opened the door, I heard Randall saying to one of the four youngsters who were working on a scene, “You’re acting! Stop acting!” That really caught my attention. I was very intrigued and curious about what this acting teacher actually meant. The children’s class ended, and Barbara introduced me to Randall. After a brief conversation, he invited me to return for an adult class the next week, to which I agreed.

I showed up the next meeting ready to jump in despite my nervousness. Over the next few weeks Randall explained and emphasized several times that it was not about acting in the usual sense. Instead it was about becoming that character, to dive into the role so deeply that 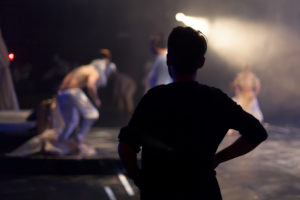 you set your small self aside and totally surrender to being the character you are playing. I eventually began to understand and experience what that meant. Participating in the class pushed me into some personal, emotional, and spiritual edges, and I eventually realized that it was not at all about faking or pretending.

One scene I did with Audrey, a fellow student, really brought home what it was like to set aside my usual self and become the character. It was the scene in the movie Misery where Annie Wilkes (played by Kathy Bates) discovers that the author Paul Sheldon (played by James Caan) discovers in reading his latest manuscript that he kills off Annie’s all-time favorite character. She becomes so outraged that she proceeds to break his ankles with a sledgehammer!

Audrey used a stick to mimic the sledgehammer and hit each of my ankles a couple of times, though not too hard, but hard enough that I could feel the whack. It didn’t break my ankles, but I was so much into the character that it sure felt like my ankles had been crushed! I was in excruciating pain and I literally fell on the floor screaming in agony, sobbing deeply, fearful for my life! For those few minutes I was definitely not acting nor faking it! I went so deep that it took several minutes to shake off the role. When I finally stood up it took a couple of my fellow students to help me back to the chair. Nope! Sure wasn’t faking it! 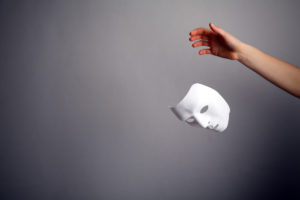 This approach is called method acting, defined as “a technique or type of acting in which an actor aspires to encourage sincere and emotionally expressive performances by fully inhabiting the role of the character.” Some actors who employ this exceptionally well are Meryl Streep, Daniel Day-Lewis, Jessica Chastain, and Robert De Niro, to name a few.

The aim is to find that character inside you and allow him or her to emerge into full presence and expression through you and as you. Your body, mind, and heart become the instrument through which the character plays out the role. You become the character and the character becomes you. If you immerse yourself to that depth, your small self is deeply submerged and dominated by the one you’ve called forth. Actors have reported that they continue to carry a particular character for several weeks beyond the actual performance.

Gretchen McKay, a friend and shamanic colleague, made several trips to Africa to study with Zulu Sangoma (African Shaman) P.H. Mtshali. After several years of apprenticeship under his tutelage she was initiated as Sangoma. One time in a conversation with her she described how in the village where she stayed there would periodically be community gatherings where stories were shared in circle. There would be occasions when someone would suddenly go into an altered state and begin talking as if channeling an ancestor. Gretchen learned that they were not channeling in the usual sense of the word but instead had become the ancestor. The entire circle quieted, everyone knowing that an ancestor had shown up to deliver an important communication. 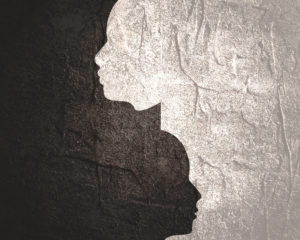 So what does all this have to do with shamanism and shamanic practice? Like method acting and ancestor communication in the Zulu circle, being an effective shamanic practitioner is definitely not about faking it or pretending, but instead is about embodiment. Of course, training or an apprenticeship is required to gain the necessary procedures and skills, but those alone don’t make an effective practitioner. You can have a whole bunch of drums, rattles, totems, crystals, and other sacred artifacts, but that alone doesn’t cut it.

Here are some essential principles of effective shamanic work that parallel “acting” as described above:

Something you might consider is to take an acting class, one similar to the one I described, or else an improv class. Either will stretch your comfort zone and you’ll find that many of the lessons learned in either of these classes can help you dive even deeper into your role as a spiritual healer and leader.
Oh, yeah—and when you’re doing the work, “stop acting!”

A Table of Union
The Peruvian Mesa as a Syncretic Tool

My shamanic training is rooted in Peruvian curanderismo, specifically in the use of the spiritual altar called a mesa. A mesa is the shaman’s gateway into the soul realm. In Spanish, mesa literally means “table,” which is fitting because it is the place where the...