The Sacred Stag: A True Story of Mystical Connection

The early autumn day was gray with a low and heavy sky. Around mid-morning, rain began to fall. The thick atmosphere took on a meditative rhythm, expressed in the soothing patter on lush late-summer vegetation. I was drawn to the large window overlooking the swift stream that flowed below, behind my house. This stream rushed to the point of madness in the early spring thaw and flowed like molten, smoked silver in summer’s full moons. By autumn, it whispered secrets and sang away the days, until the freeze stilled its voice and sculpted ice palaces under its small waterfall.
Crum Elbow Creek, as it was called, had a resident copperhead as guardian and cast a mysterious aura all along its bank. I believe its magic summoned me that day.

There in the back garden very close to the house was the largest stag I had ever encountered. His neck was massive and strong, supporting majestic antlers with eight points each. He lay in the middle of my iris patch, alert and at ease. As I stood gazing at him in awe, he slowly turned his head, met my eyes, and held them. I felt mesmerized by him. The power of his presence captivated me and it took effort to pull my gaze away and return to my work. 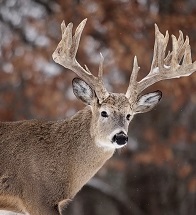 On and off throughout the day I returned to the window to find him still there, as if keeping vigil, as if offering himself as a guardian or familiar. Each time I went to the window he would slowly turn his great head and look at me, nostrils flaring as if to gather my scent. Around 3:00 p.m., I went again to look and found the garden empty. I offered a prayer of gratitude for such a magical encounter and filed the experience away in my soul’s treasure chest, to visit again and again when I needed the reminder that there is indeed miraculous enchantment in this world. I had no idea what powerful medicine his visitation was about to bring to me.

One evening in early autumn, I was traveling home from visiting a friend in a neighboring state. Driving along a secondary road in the last stage of the trip, the light was just fading from dusk to dark. Visibility and depth perception had become tricky with the twilight. As I glanced into the rear view mirror there was the sound of a muffled thud and a crack. The windshield on the passenger side shattered into a dense spider web. I was startled, thinking I had hit one of the mailboxes perching on the posts along the side of the road and upset at the damage to my car. As I pulled into my driveway under the floodlight, a chill gripped my stomach. The mark of impact was a circular depression in the crackled glass of the windshield, not the sharp edged impression of a geometric object. My heart pounded as I got out of the car and walked around to the front right side. There was what looked, in size and shape, like the impression of a human head.

Panic skyrocketed through me. Had I killed someone? Was a person lying dead or seriously wounded at the edge of the road? I had to return to the scene. Urgency seized me as I called my friend and asked him to come with me. The thought of getting into that car with the shattered glass was unbearable. When my friend arrived, he said there were police cars, flashing lights, and a roadblock where the accident occurred. The shrieking panic rising in me crashed against the sensation of fading into a faint and brought me near to hysteria. We got into my friend’s car and headed to the police station.

By this time it was approaching 9:00 p.m. The road was clear of police cars and flashing lights, but not knowing what had actually happened to the person left me stiff with panic and dread. We immediately drove to the police station and asked to speak with the officer on duty. I described what I thought had happened and expressed my terror at the realization of what actually did occur. The young policeman on duty took my statement and reassured me that the man I hit was not seriously injured, but had been brought to the nearest hospital for evaluation. Since I had come of my own accord to report the accident and explained what I thought had occurred, the officer said it was an understandable mistake. There would be no charges brought against me. He reported that the man was wearing black clothing, making him nearly invisible in the dusk. In addition, the shoulder on that stretch of road was practically nonexistent. When I expressed concern for his condition the police officer said he would call me as soon as they had information from the hospital.

True to his word, the telephone rang at 11:00 p.m. The pedestrian sustained only a minor knee injury which was being treated. It had come to light, however, that he was wanted for robbery in another county. When released, he would be delivered to that county jail. The officer jokingly thanked me for bringing him to justice. I felt weak with relief and gratitude that the man was basically all right. As a tactic to lighten the experience, I decided to name my car “Bounty Hunter.” Dark humor has always been one of my defenses in times of stress. But the fact of his being apprehended for a crime as a result of this terrifying incident made the whole situation seem weirdly surreal. It was to become even more so.

The next week as I was telling a close friend about the accident she let out a gasp. On the Monday after the disturbing incident, her co-worker told a story about her boyfriend. He had been visiting friends in a county farther north and was hit by a car driven by a woman who thought she had hit a mailbox! The “co-incidence” of this was beyond belief. In this instance I feel the word synchronicity is more applicable, which the dictionary defines as “the coincidental occurrence of events and especially psychic events that seem related but are not explained by conventional mechanisms of causality – used especially in the psychology of C.G. Jung.” I had no idea why this connection was being played out. It was a point of curiosity for me, but my main reaction was relief and gratitude that the stranger and I were spared in this close encounter with tragedy.

Autumn deepened, I continued on with my life. I occasionally thought of the magnificent buck that had spent the rainy afternoon vigil at my home. I hoped I would see him again. One late November day I was readying my gardens for the approaching winter when a sharp crack sounded. I straightened up as a bolt of knowing shot through me. Someone had killed my stag. I knew it in every fiber of my being, as a great sadness filled me. I called my friend who had helped me that traumatic evening of the collision and told him what I heard and what I believed. Two days later my friend arrived with a local newspaper. There on the front page was the photograph. My mythic visitor was hanging by his glorious rack of antlers with a headline stating him to be the largest buck killed in Dutchess County in recorded history. The proud hunter pictured beside his kill was the kind young officer on duty, to whom I had reported the accident!

People who take life at face value may say I am making a big deal of an ordinary coincidence. As I piece together the elements of this story, I cannot help but see the events as a tale of sacrifice and redemption. The “unconventional mechanism of causality” seems related to protecting me from the remorse and trauma of committing accidental vehicular homicide, as well as sparing the life of a not so innocent man while insuring he be brought to justice.

The enchanted afternoon with the deer; the bizarre connection of the outlaw boyfriend of someone I knew; the hunter who killed the stag being the kind policeman who took my statement of the accident—all seem to braid a strange story of magic, connection, redemption and protection. I believe that our earthly reality is a weave of many elements and many dimensions. I feel that all of us who share this plane of existence have the capacity to open to these energies and mysteries that occasionally reveal themselves to us.

The first dead animal I ever saw as a child of five was a deer my father brought home from his hunting trip. I looked into the uninhabited eyes, touched the still soft black nose and wept. Since being a small child the animals have always been my joy and pleasure, my comfort and solace. It was my first encounter with the food chain that weaves the fabric of our world. Life consumes life and that is the way of it. The pattern of this story points to where ordinary, earthly reality overlaps with the mythic and archetypal realms; where outcomes have impact on my sense of the nature of existence and affect my very soul.

Writing the account of this synchronicity has led me to reenter that space where the event occurred. Why did such a complex pattern weave itself into my life? What did the magnificent stag have to tell me; why and how was the man I hit with the car involved? These are questions that I still have to ponder, these are doorways of mystery now open wider for me. I’m grateful I was given this glimpse into the many connecting patterns that make up this earth walk. In gratitude for this experience, I renamed my car “Graziella” – gratitude.