Soul Loss: An Interview with a Mayan Daycounter

[Note: Bob Makransky met Gg (Pronounced “Gigi”), an American woman who is an initiated Mayan daycounter, several years ago in Antigua Guatemala.  Bob studied extensively with his teacher don Abel Yat  Saquib until his teacher’s death in 2009. This interview took place in May 2017, at Bob’s home in the village of Chajaneb near San Juan Chamelco, A.V. Guatemala.]

Gg: We have two spirits, the pixan (pronounced: pee – shahn) and the ool: one you’re born with and the other is your life force. The Chinese have a similar concept, which they call Chi, your life force–only the Chinese didn’t have Christianity to disregard their vital principles.  When you have a bad scare, the ool, or the life force can jump out of you, or be weakened and cause illnesses.

Bob:  I’ve heard talk about that a lot, but I have never really understood what it means.

Gg: It’s horrible. You become like this shell: you feel like you, you talk like you, but you’re not really all there anymore. Keep in mind that when the body dies, it’s the ool–your breath of life–that dissipates into the atmosphere. The pixan is your forever soul. It exists before birth and can reincarnate. The ool maintains the will and affects your emotions in general. So when it skips out before time, well, you become weak in a manner of speaking and things affect you more than they should. Everything is too much, nothing seems to go right, and you feel powerless to do anything about it.

In Mayan medicine, this sort of fear is a disease, something that can and must be cured. If it’s not, you remain fearful of everything and basically powerless for the rest of your life. Worse, another life force can jump into this void inside you. A friend of mine told me about this sort of thing many years ago. She called them “walk-ins.” I guess it could be something like a possession, but not as dramatic as it is portrayed in Hollywood. Your life force – your essence – is gone and another life force walks into you. 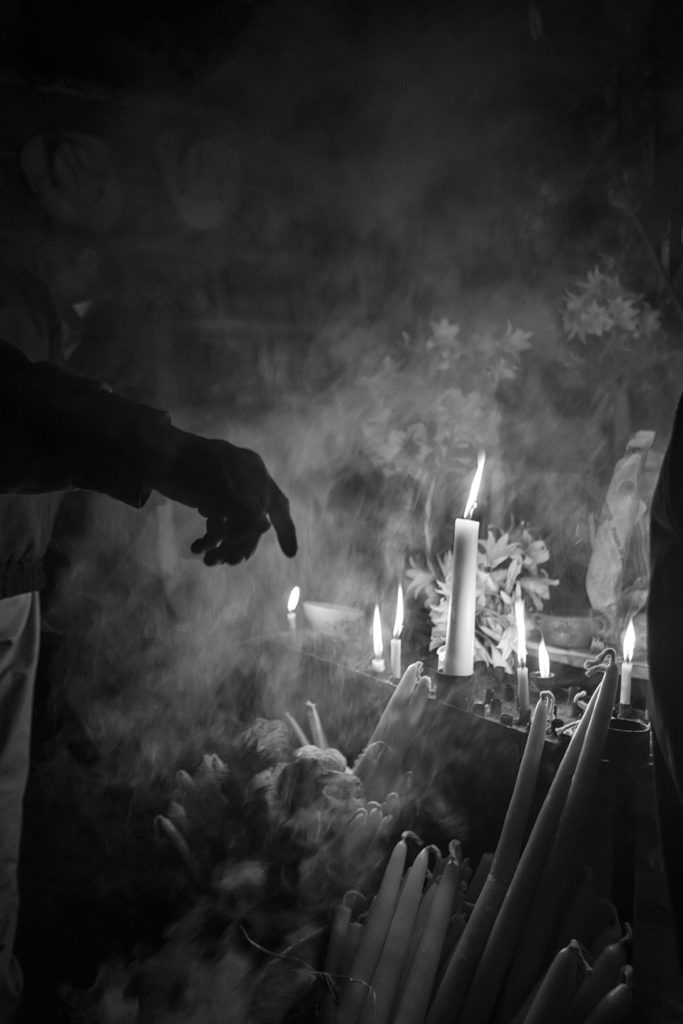 Bob: Can you elaborate on the walk-ins?

Gg: The concept of spirit possession exists in many religions and faiths, including Christianity, Buddhism, Vodou, Hinduism, Islam, and many Asian and African traditions.

The main difference with a walk-in is that they are not so obvious and not “demonic.”  It is a “soul-exchange” of sorts. One soul leaves and another one comes in to fill that void.  This can be a temporary or permanent exchange. It does not require permission from the host.

Bob:  It’s something I don’t think I’ve ever encountered. If I have, I didn’t recognize it.

Bob:  When was that?

Gg:  A couple of years ago. It took me a while to realize it and then to fix it.

Bob:  What was the scare that caused it?

Bob: Was it that rip tide on the Pacific Coast here?

Gg:  Yes. It got my friend and his son, and had them stuck right at the point where the waves were crashing down. I had a surfboard, so I thought I could help them, but I almost drowned in the process. In the end, it took three big guys with long boards to get everyone out.

Bob:  What did it feel like, to lose your ool?

Gg:  It felt lonely, desperate–very melancholic. I know I’m a strong human person. My mind is strong, my body is strong, I have a very strong will. But I just started to go through the motions of my daily life listlessly, with little enthusiasm or care. Like Death of a Salesman, Willy Loman, everyday. And anger! I would get angry over nothing.

Bob:  So how can people get it back?

Gg:  You, yourself, have to call it back–like calling your inner child.  You have to nurture it, make it feel safe to come back with whatever you have left in you. You want to be whole again, but since it was a bad fright that usually forces the ool to leave, you must be soft and gentle, encouraging your spirit to come back to you.  Of course, it’s better if you can get help from a trained person, someone accomplished in some discipline–not necessarily magic, but someone trained in the spiritual world, that knows the difference between the two souls. Actually, it’s essential to have someone help you. I can’t imagine doing it alone.

So if someone felt disconnected from themselves, here in Guatemala we would look at the chart of the person to understand them better, and find the elements that could be associated with the trauma. If the person cannot remember the events that led to soul loss, we would do a divination with our varas. 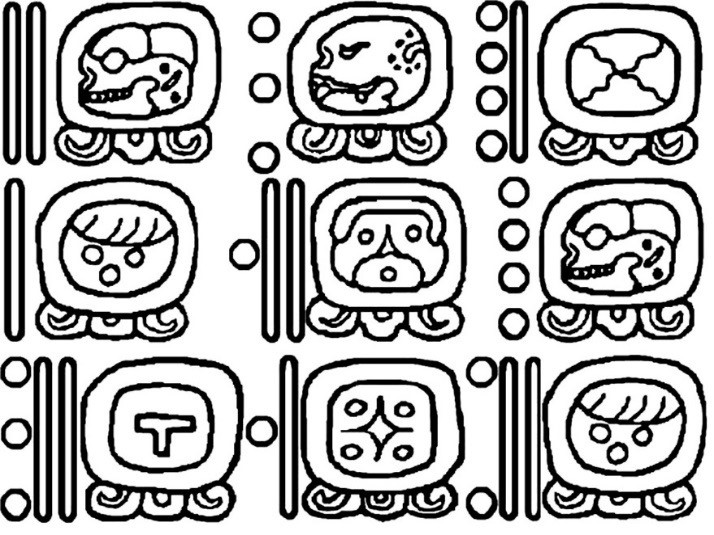 This is Albert Einstein’s chart. The “chart” is a diagram of a person’s nine nawales (“day signs” somewhat akin to the zodiac) used to divine information about a person’s character and destiny. However, the nawales differ from someone’s zodiacal signs in that nawales are tangible forces that will protect a person when they are invoked and propitiated on their special days.

Then we would do a series of ceremonies and have them bathe with special herbs.  It’s good to have a physical object that relates to the trauma as well. I used a conch shell to help me call my ool back, even though I’ve never found one on the beach here. The Pacific Ocean in Guatemala is far too rough for seashells! 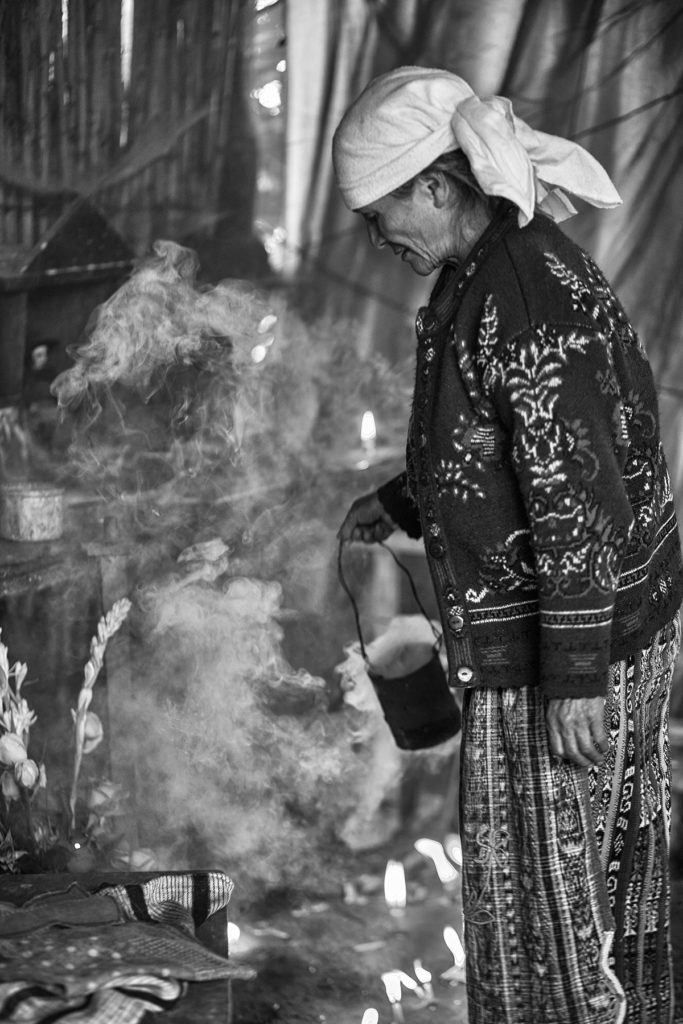 Bob: Why a conch shell?

Gg:  I used a conch because it was something tangible from the ocean. It was a gift to me from a beloved friend. The energy that it came to me with, made it special in and of itself, but traditionally, we also use conch shells in ceremonies to call to the four directions. My nawal also represents the four directions, so I thought it made sense to use it to call my life force back. I would whisper into it, praying to the four directions, the four Balames (protectors) and their wives, praying to my own spirit to come back to me.

I didn’t have to go back to the beach where it happened, I could use the conch shell to connect me to the place. I still have it on my altar, and I always make sure that it’s nice and clean and cared for. For me, it was the vehicle that helped me to call my spirit back.

Bob: Can you tell me a bit more about the ceremonies you would do?

Gg: For the ceremonies (Xukulem) we would go to power places associated with the energy of the ancestors, or the person’s own nawal.  These would take place at actual archeological sites, or at sacred shrines known mostly only to daykeepers and are located in caves, mountains, riverbanks and other places throughout the country.

The nature of these particular ceremonies would be to reconnect with our essence and ask for the assistance of our nawal, our spirit guides, the ancestors, all of the forces in nature, all of the energies as laid out in Mayan Cosmovision. These ceremonies usually last several hours and consist of constructing an offering of candles of many colors, incenses made from resins and tree sap or bark, sugar, honey, tobacco, liquor, cacao–those sorts of things. These are burned as an offering, with prayers, petitions and much gratitude.

Bob:  Who helped you do your ceremony of calling back your lost ool? 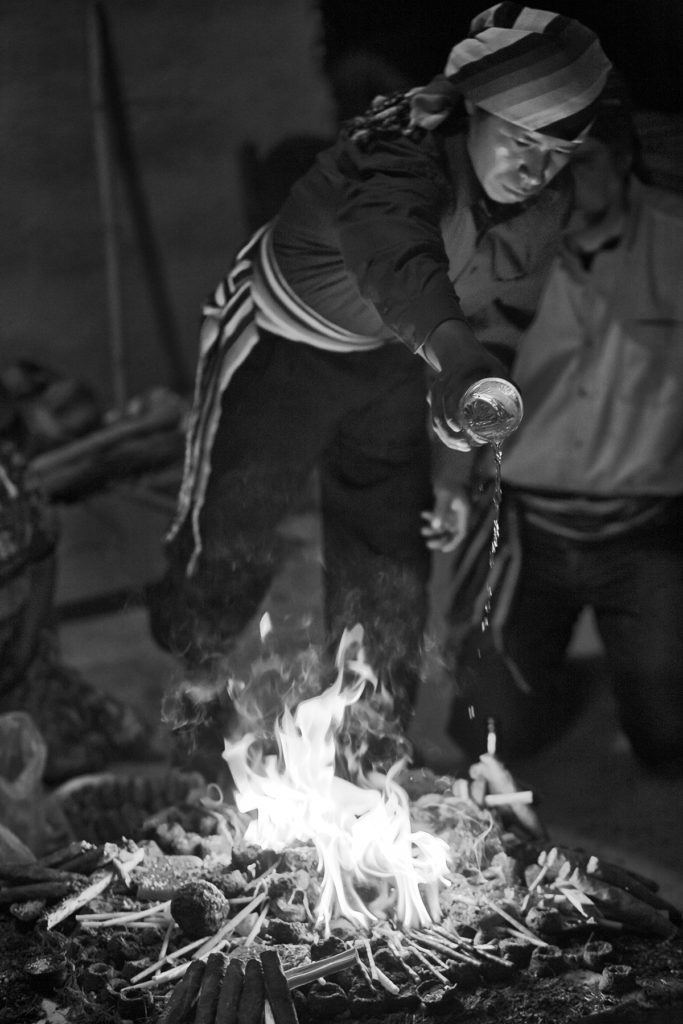 Gg:  A Mayan daycounter friend of mine, Kajkan. That’s when I first started working with him actually. Since then, we’ve become great friends and allies. There was another daykeeper as well that helped guide me through that time. I always feel I have a tremendous amount of support around me. I’m very grateful for that. After that ceremony, I brought ocean water and sand from that beach, and kept them on my altar.

After a lot of work–ceremonies, herbal baths, meditations–I felt complete again. Whole and strong. It wasn’t an all of a sudden kind of thing, like in one instant. It was gradual, it took a while. Even though it jumped out in one instant, you’re not aware it’s gone right away. In the same way, you’re not really conscious of the fact that it’s back right away either. But then one day I was like “Where did all of this vitality come from?  Where did all this force come from?” I had oomph and force again, and realized I must be back. I am back! 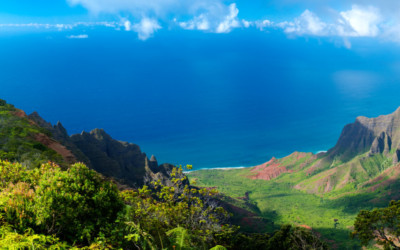 Hawaiian Perspectives on the Matrix of the Soul

From time to time we plan to republish earlier articles, especially those that appeared while we were producing hard copy back in the 2000s. We have many new members who have joined in recent years and they may not be aware of the earlier issues. Nevertheless, all the... 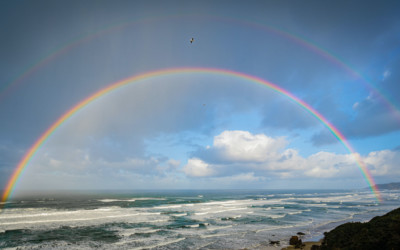 Malidoma was a West African writer, diviner, and teacher. Born in a Dagara community in Dano, Burkina Faso, as a child he was taken from his home, “literally kidnapped,” he said, by Jesuit priests in a nearby colonial town. He was placed in a Catholic boarding school,... 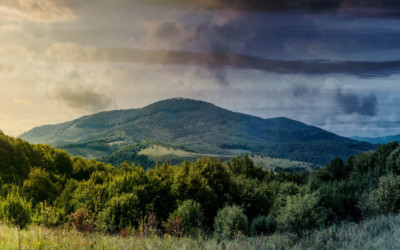 The Dance of Light and Dark:
Ways to Commemorate
the Winter Solstice/Yule

The strongest component of the winter season is light. Throughout the year, there is the dance of light and dark, and at the winter solstice, this dance is at its most intense and pronounced, with the longest period of darkness and the shortest period of light. Our...

Hawaiian Perspectives on the Matrix of the Soul

From time to time we plan to republish earlier articles, especially those that appeared while we were producing hard copy back in the 2000s. We have many new members who have joined in recent years and they may not be aware of the earlier issues. Nevertheless, all the...

Malidoma was a West African writer, diviner, and teacher. Born in a Dagara community in Dano, Burkina Faso, as a child he was taken from his home, “literally kidnapped,” he said, by Jesuit priests in a nearby colonial town. He was placed in a Catholic boarding school,...

The Dance of Light and Dark:
Ways to Commemorate
the Winter Solstice/Yule

The strongest component of the winter season is light. Throughout the year, there is the dance of light and dark, and at the winter solstice, this dance is at its most intense and pronounced, with the longest period of darkness and the shortest period of light. Our... 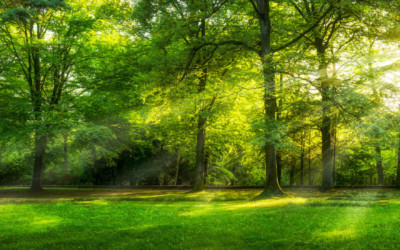 Shamanic journey work can help us through difficult times.  When we have a strong journey practice, we might even journey every day, or several times a week or month.  There are no hard and fast rules about how often or when to journey.  What's important is that the...