Praying at the River

Unless they are flooded and overflowing their banks, rivers pretty much keep to themselves, flowing through channels cut into the land since ancient times.  Although many rivers are powerful, even mighty, they can become somewhat helpless in the face of human abuse.  Since earliest times, human beings have thrown waste and garbage into them.  But there was a time when the human population was small, and rivers served us, cleansing and carrying away our refuse, which then was as elemental as nature herself.  In modern times, however, with large populations and industrialized waste that remains toxic for generations, rivers are at our mercy. And sometimes they cry for help, a cry often heard only by people attuned to the voices of the land, the voices of the animals and the waters.  And when these earth-oriented people stand up and speak, the rivers speak through them.

In the spring of 2016 the Standing Rock Sioux established a camp to protest and create spiritual resistance to the Dakota Access Pipeline meant to go under the Missouri and Mississippi rivers and Lake Oahe.  These river systems provide drinking water for the Sioux reservation, as well as seventeen million people downstream.  The pipeline also crosses sacred tribal lands.  By the fall of 2016 the increasing numbers of Native protestors, who came from over 300 tribes, were joined by tens of thousands of people from all over the world who arrived to support them.  With international attention  to the site, the government and corporate interests backing the pipeline faced off against crowds of peaceful protesters on the Cannon Ball River.  Eventually, police and army personnel arrived in riot gear with mace, guard dogs, and water cannons.  Arrests were made.  Winter arrived, and in February police and the National Guard evicted the remaining protestors from the camp.  But the conflict did not end there. The spirit of protest—the spirit of prayer—continues both at Standing Rock and around the world.

Layli Long Soldier, an Oglala Lakota poet, writer, and artist, reflects on how this movement began with young people and writes, “In concentric circles around them I see our women. Our men. Elders. Allies.”  And the concentric circles continue to ripple outward like the waters themselves, finding new allies.  Circles of prayer, circles of water protectors, circles of people asking the rivers to speak through them and through their prayers.  Deborah A. Miranda, a Native American writer and poet, writes

“…prayer is contagious…
oh people, come feast
on this prayer so righteous
it burns your tongues;
wash it down with a sip from the river
whose songs will always call you
Beloved.”

And the circles of prayer continue to give voice to rivers in many places.

On the first Sunday of each month, on the banks of the Hudson River at Poughkeepsie, New York, we form a prayer circle, led by Rhianna Mirabello, founder and owner of the Dreaming Goddess center and a facilitator of healing and spiritual communities.  She had felt a deep call to stand with the river protectors, and to help protect the land and the elements. So she went to Standing Rock with several friends.  Having watched a video of the ceremonial events in South Dakota, she remembers, “How impressed I was by the way the women were so strong in their role as water carriers and the protectors of water. When I arrived at Standing Rock I discovered that the men honored the women in this role by holding space and providing protection as the women walked to the river each morning to offer prayers.”  After returning to New York, Rhianna created a river ceremony in the spirit of those she observed at Standing Rock. 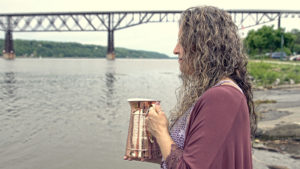 “Our ceremony honors women as the water carriers and bearers of life. We use the mantra Water is life, which was chanted in Lakota at Standing Rock. And I invite each person in our circle to say it in the language of their own ancestors.  So we hear Wasser ist Leben, El agua es vida, L’eau est la vie, and so forth.”  The ceremony begins by calling the women to stand in a circle around a pitcher that contains water from numerous sources, sacred waters from around the world.  Each woman holds two sticks, often ones found at the edge of the river, and together they strike them in sync with the others in the circle.  Meanwhile, the men stand outside the circle in the four directions to hold space and to honor and protect the women inside who chant Nibi wabo, an Objibwe woman’s water song to honor the river.

“One of the many gifts that going to Standing Rock bestowed on me,” explains Rhianna, “was to witness a functioning community of women, men, children, elders, and the people who came from all over to support a single goal which was to safeguard the rivers and drinking water of the people who live there. When I returned home, it made sense to provide a safe place where people who live in the Hudson Valley could pray and honor our own river.”

All rivers need our help, need our prayers.

Over the years the Hudson has been polluted by various sources.  General Electric disposed of PCBs in the river for many decades.  An EPA mandate has forced the industry to clean up the PCBs, but much work remains to be done.  Farmers have allowed fertilizers to wash into the river, and other industries along the banks have deposited waste, which warmed the waters over many years. Native people in New York call the Hudson Mahicantuck, a Lenape word that means “the river that flows in two directions,” because the Hudson is a fjord.  The salt point where the brackish water from the Atlantic and the river water meet is sometimes right at the Poughkeepsie boat launch where our prayer circle meets.  Of its 315-mile course from Tear of the Clouds to New York Harbor, the lower 153 miles constitute the tidal estuary. With its connection to the sea, the river is physically in touch with the other waters of the earth, reaffirming the old Irish saying that all the rivers of the world know each other. Prayers and ceremonies here flow out to waters beyond the river itself.

At the River’s Edge

When the women have concluded their song, the men escort them to the water’s edge, where each person—women first, then men— offers prayers to the river while tossing a pinch of tobacco into the water, then pouring a small splash from the pitcher to follow it.  Sometimes a drum or rattle accompanies this part of the ceremony as everyone sings our version of this song by Coco Love Alcorn. 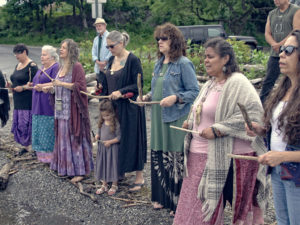 This simple song is repeated until everyone, women, men, and children, have offered their private prayers, and given the tobacco and sacred water to the river.

Our ceremony is totally in service to the Hudson River Valley. There is no fee or donation collected.  As we pray at the river’s edge we feel a strong solidarity with the people of Standing Rock, both those Native people who live there and those who traveled many miles to support the protest.  In a way, the events at Standing Rock, although they began as protest, became much more than protest.  They became a movement that circled out to many parts of the world where the earth and its resources are being abused and depleted.  One of the prayers that we offer at the river is a prayer that others around the world will find their own ways to honor the rivers that bring life to their areas, to honor the water that is our life. The rivers need our voices. And we need to hear theirs.  As Deborah Miranda says, if we pray and sing at the river, the river’s own songs will call us “Beloved.”

Does the river hear us?

Yes.  One morning as we stood on the boat dock before we began our ceremony, the river rose up enough to wash over the dock and our feet—with no boat in sight to cause a wake. The water that appeared to bless us came on its own.  And it came only where we were standing. And then it receded as we went down the bank to continue our offerings.

To learn more about the Poughkeepsie waterfront ceremony, go to
https://Dreaminggoddess.com/classes-events/water-ceremony-at-poughkeepsie-waterfront/.

To learn more about the woman’s water song and water ceremonies, go to
https://insectamonarca.wordpress.com/2010/01/29/nibi-wabo-water-ceremony.

To hear the music to the water song by Alcorn, go to https://cocolovealcorn.com/music. The song’s title is The River.

To learn more about the role of Native women at Standing Rock, go to https://orionmagazine.org/article/women-standing-rock/.