The Land Has Its Own Timeline

One of the most interesting things I’ve encountered in my shamanic work is the emotional connection that the land has with us. We often think of it as the other way around, that we are the ones actively experiencing a connection to the land, whether that be through our ancestry, our desire to be gentle stewards of the earth, or simply our love for the place in which we live. But the earth we stand on has its own connection to us, and feels things in its own way.

This was made very clear to me recently after a psychopomp journey. For me, the most difficult aspect of psychopomp work has not been in helping the dead to cross over, but in healing the land in cases where traumatic death (such as suicide or a car accident) has occurred. For the land feels the impact of that death, and carries a grief of its own. My spirit guides do most of the work in assisting the dead (they are the best at it, after all), helping the soul to peacefully transition. But within this journey, I am often tasked with healing the land where the death occurred. This involves pressing my hands onto the earth. That connection will often result in a field of flowers springing up, and animals appearing, as if the land needs to feel an abundance of life in the place where death has so recently reigned. I never question it; the journey spins its own story, after all. 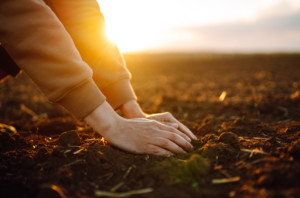 Because most of my psychopomp work is done remotely, my only impressions of the land come from my journey to the Otherworld. But what does the land feel like in ordinary reality after a healing has taken place? My assumption has always been that the land would feel, well, peaceful. Resolved. But recently I had those assumptions challenged.

It occurred after a fatal car accident, not far from my home, that claimed the life of a young man. His spirit was still hanging around, a gentle and somewhat shy soul. The psychopomp journey unfolded as expected: he crossed over with the help of my spirit guides and I placed my hands on the earth. White flowers sprang up all across the road where the accident had occurred. A fawn ambled through them, and then other animals began to appear. Healing had begun, or so I thought.

A few days later, as I was driving along that stretch of road, I felt an intense sadness wash over me. I brushed the feeling off as simply the product of my emotions and sensitivity to the tragic event. Of course I would feel sad here. Who wouldn’t?

But as time passed I realized it wasn’t me at all—it was the land’s grief I was sensing. But what about the shamanic journey I had made? The psychopomp work? The healing of the land? Did I need to go back in and try to “fix” what seemed to be an unending grief? Had I missed something the first time? Why wasn’t everything at peace, as it had seemed to be in the journey? Was there something else there? As I asked myself these questions one day, driving yet again past the spot where the accident had occurred, I heard an inner voice say “The land has its own timeline.”

It was like a puzzle piece sliding into place; I was able to see the bigger picture. Just as each one of us grieves differently, some for a short time, some forever, some quietly, some howling their grief to their stars; and just as it would be inappropriate for us to say to someone: “You have been sad for too long. You must stop now. You must move on,” it would be likewise inappropriate to expect the ground beneath our feet, or the trees and flowers and animals, to stop their grieving simply because we believe the situation has been resolved.

In a psychopomp journey, the shaman can assist the human soul, but once that is complete one must begin to think in terms of place, rather than person. Because while the soul has moved on, the land remains. Just as we should be gentle with someone grieving the loss of a loved one, so should we treat the land that grieves.

The shaman starts the healing process. The land determines when it is finished. It has its own sovereignty, and my mistake was to believe that what I was doing as a shaman was some kind of magic. It’s not. It’s a process of communication, of holding space, of facilitating healing rather than being the healer. This was the message I received: The land can heal itself quite well, thank you. On its own timeline.

And considering how brief a time humanity has been here on earth, doesn’t this make sense? The land I stand on has known the weighty tread of dinosaurs. Has felt the continental shift, has stretched and cracked and reformed itself over eons. We know how old the earth is, but who can really understand a length of time such as 4.5 billion years? People have been here for the mere blink of an eye in comparison. The land feels in terms of millennia and epochs, not in weeks or months or years as we do. It grieves on a different timeline.

Over the months, I’ve noticed, with relief, that the sadness at the site of the accident has abated. It’s still there, but it’s softer now, a more tender grief. And it is not my job to fix it.

It’s normal for those of us who do this work to want to ameliorate any pain right away. But if there is a sorrow that remains within the land after a journey, and seems to remain too long, ask yourself if this might simply be the land taking its own time. I know now that the flowers that spring up in my journey are not an indication that healing is complete, but a quiet acknowledgment between the land and myself, that the grief is welcomed, accepted, free to spring up as its own kind of beauty. The grief itself, then, might be the magic. See how it transforms into something new, given time.