In January there was a tragic incident that took place in a rural house outside of New Mexico. A husband who I will call Fred and his wife were involved in a custody battle over their three-year-old son. The mother had moved out and the boy was staying with his father in the home which they were renting. On the day of the final custody hearing the father sent out a battery of emails announcing that he was killing himself, his son, and their dog so that the boy would not go to the mother. By the time the emails reached their destinations the deed had been carried out.

Being in a rural area on a steep dirt road and having just snowed heavily, the home was unreachable at the time and authorities had an extremely difficult time getting to the house to inspect. When they did, what they found was disturbing.

The house was a rambling structure with add-on rooms. The original part of the house had been built in the late 1800’s with more recent re-modeling. It was set in a valley that had a number of other rural houses nearby, one right next door to it. 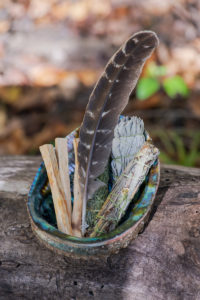 Some of the people in that community knew of our work with Shamanism without Borders and put in a request that we come out and clear the house and land of such recent trauma. Unfortunately we were committed to two Retreats/Travel Programs in Mexico and had to postpone our cleaning for a couple of weeks until we were back. In the meantime the sheriff completed his inspections, the house was remediated, and some of the belongings were removed by Fred’s relatives.

In order to do the clearing we had to get permission from the owner and a clearance from the sheriff because the site had been made off-limits. It so happened that we were scheduled to do an advanced shamanic practitioners training with ten students and a part of that training was to do a house clearing. This was an opportunity and very critical learning experience for our students. On the scheduled day with some good classroom time behind us, we drove out in three vehicles to the remote site of the murder and suicide. It was a cold windy day in March and there was ample mud and patches of snow all over the ground. It was not easy to get there.

What we found was somber. We gathered outside the house and had a little talk about protection and how to proceed as a group. We talked about the need for neutrality and not to get distracted by the tragic story. Just do the clearing as effectively and efficiently as possible and listen to our guides and allies and follow their direction as to how to proceed. Even so, some of our students burst into tears upon entering the house. It was indeed holding a great deal of tragedy and grief. Nevertheless, they marched in and began to work in earnest with tobacco and various shamanic tools on the house clearing. Having recently recovered from the flu, I  avoided all the tobacco smoke inside the house and instead focused on the entryway. Several of the group noticed that the area just outside the front door was in need of clearing. That is where I spent the majority of my time.

After about an hour-and-a-half we again convened outside to discuss what we had felt, sensed, seen, and heard. This turned out to be very fruitful and many were able to validate what they experienced by what others said as well. The house and surrounding area received a thorough clearing as well.  I had been drawn to work on the whole valley as were several others. It was as if this entire small valley had been deeply affected by not only this event but historically by other tragedies, perhaps a former murder on the property and other disturbing occurrences that we could not name.

Interestingly our daughter Anna, an expert house clearer, sensed that while there was no sign of Fred or the dog energetically, the small boy was still there. He seemed quite angry with what had transpired and had not been able to move on. He was quite annoyed that unexpected karma had been created for him. He was very pleased to see us and led Anna to certain places that needed particular attention. Then she helped him move on to where he needed to go. 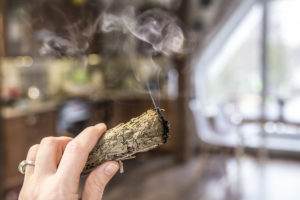 One of the phenomena that the group noticed was the deep sense of mental illness and chaos that seemed to pervade the property. Clearly these people had not only been deeply unhappy but they seemed ungrounded and disturbed. Fred’s books were everywhere with titles such as The Open Heart and Awakening the Heart, and so on. Considering what took place, it seemed the final outcome was even more tragic. It was almost as if he were trying very hard to be a constructive, good person but in the end violence and destructiveness had taken over, perhaps because of a severe bipolar disorder made much worse by the influence of the surroundings he was in.

Lena, my wife, also picked up that there had been a knife fight here between two male friends over a woman and one had killed the other. The grief left over from that event was immense. The land was thrown out of balance and out of resonance with itself.

It was not until several days later that we found out from the owner the actual history of the property. He said that the property had had a long history of misfortune over a period of many years. In the course of events, the house had been a meth lab, and people with severe mental illness had lived there. It seemed a very unstable and ungrounded place that attracted people on the edge. The owner told us that several years before, his sister had come out to survey the property and check on things and while she was there she suffered a major heart attack and died, not in the house but outside it. There was also an incidence where a bear was killed right in front of the house where I had felt such need for work. God knows what else had happened in that house since the late 1800’s,  perhaps 150 years of tragedy and misfortune. No wonder there had been so much trauma here. The spirits of the place were working against the inhabitants.

Long before the house was built, native indigenous people had lived in this region. We do not know the events that transpired hundreds, if not thousands, of years ago in this valley. Perhaps the dissonance started a very long time ago and just kept attracting more of the same to itself. Objectively the valley is actually very beautiful and is an attractive place to hike or visit.  Beauty is what drew people there in the first place, but history had not been kind in this valley.

There was a good reason we all felt what we did there. History shows layer upon layer of trauma and lack of coherence. That is what often happens to land where one tragic event after another has taken place. It attracts more of the same until there is an intervention. Hopefully our intervention on this house and land has started a new and positive chapter for the area, bringing it some clearing, balance, healing, and coherence, restoring the natural balance of mother nature that was there before negative human influence arrived. This is what Shamanism without Borders is all about.